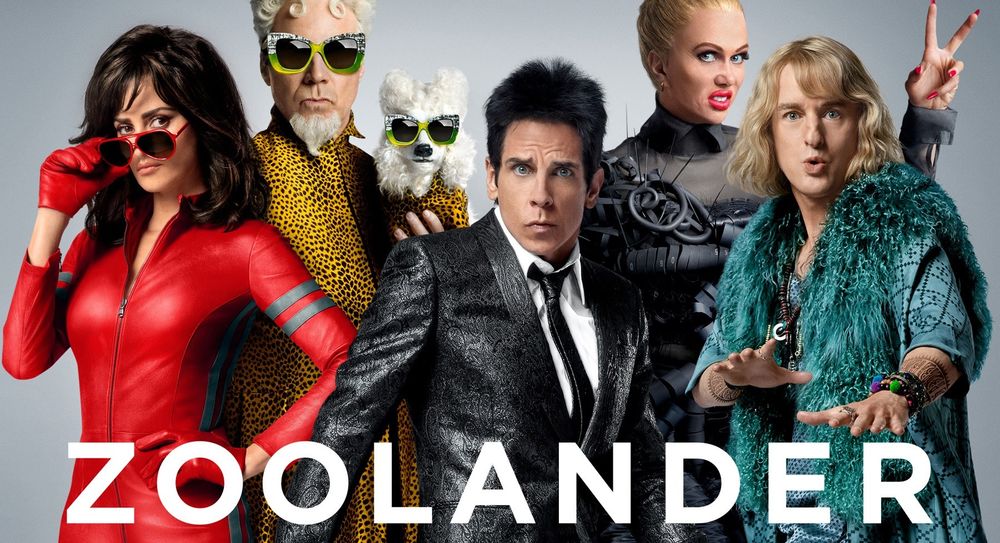 It doesn’t seem fair to compare a brand new movie to how you feel about something after years of it growing on you. I’m not sure I liked Zoolander immediately, but at some point it crept into my brain and made a cosy home for itself.

Zoolander 2, on first inspection, doesn’t shape up to its predecessor. If there’s just one problem, it’s that it has more plot than jokes, which is pretty unfortunate for a comedy.[1] But here’s some more reasons, if you’re looking for some.

It lacks pretty much all of the satire of the first one. If you remember, in Zoolander, the fashion industry was conspiring to assassinate the Malaysian Prime Minister before he could enact a minimum wage for his citizens. In 2... Mugatu is just trying to kill everyone who wronged him in the first one. It’s like a piece of bad Zoolander fan-fiction. At one point you’re expected to remember one of the most unremarkable characters from the original as if just seeing that person in a wig would be funny. It’s very strange.

There is a new person on the screen—Atoz—played by Kristen Wiig, which is a bit of a waste. I would have said “a new character”, but she isn’t one, so that wouldn’t be fair.

There’s also a character who may genuinely be the most irritating person I’ve seen in a movie ever. Later events make it pretty clear that he’s supposed to be annoying... but I feel like they over-shot ‘funny annoying’. While he was on-screen, I felt genuinely, almost physically uncomfortable and wanted him to leave so that I could laugh again. This is probably just my peculiar aging psychoses, but it seemed worth mentioning.

The other actors are much more fun. Ben Stiller and Owen Wilson don’t miss a beat slipping back into their characters. Will Ferrell can still save most scenes, though even he is pushed when he has to try to sustain a climactic moment involving non-actors who have been awkwardly inserted into the scene later. I was sad that Christine Taylor got mostly kicked out of the movie (presumably by her own choice, since she’s on good terms with the director/writer/producer), but I’m told that you can only have one female character, so they needed to remove her to get Penélope Cruz. Like Taylor before her, Cruz is the ‘straight’ character, but it’s slightly more difficult for her because she also has to be incredibly hot. I didn’t think of it until now, but switching out the non-fashion, gateway character for Cruz’s stylish fashion policewoman might be a big reason why I just didn’t feel as at home in this movie.

Am I am claiming that my problem with this movie is that Penélope Cruz was too hot? Surely not.

There were nice bits. It opens magnificently. There’s a very funny bit involving erections. The standard Zoolandery Zoolander bits are good, espeically the visit to Mugatu. Keifer Sutherland is excellent. It’s just... I don’t know why people even make comedy sequels. “What if we did all that again... but now people will expect most of it, and so it’ll be less funny?”[2]