There’s a problem out there and for all I know, someone’s solved it. But it’s not the sort of thing that tech reviews seem to discuss.

It’s a problem with wireless headphones. After a string of tragic ends to otherwise excellent headphones–all involving failing cords–I resolved to try bluetooth headphones. I would not go back, even with the whinging that you’re about to experience. No more taking bags off without having to remove headphones, getting unexpectedly attached to people on trains, or most importantly, audio that chops in and out depending on the angle your cord is currently in.

However, for all of that, you do need to worry about batteries. And you have to worry about them more than you’d think, because (in my vast experience of two sets of headphones) this pretty simple problem has been totally messed up by the people who make them. The headphones in question are: 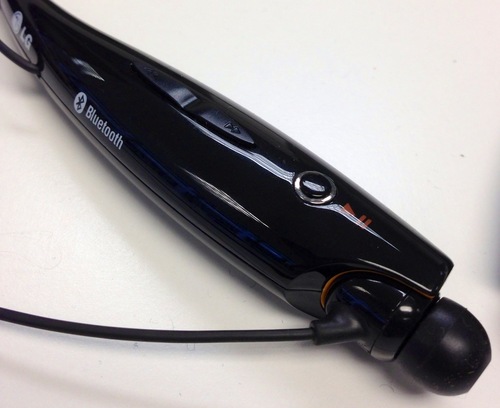 What actually needs to be done by the headset to allow you to manage your batteries? The headset needs to manage two things:

Regarding general battery levels, if you’ve got an iPhone, and you happen to be lucky enough to buy one of the few headsets that support it, you can use the bluetooth battery indicator built into the OS. The BackBeat supports it, and it’s really useful. But headphones can’t rely on an iOS-specific feature, and so there needs to be a backup. Because of this, the BackBeat also announces the remaining battery time when you turn it on.

The LG Tone has much better battery life than the BackBeat, and it seems that because of this they’ve decided not to bother telling you a damn thing about your battery. You can press a button to check battery life… but the light it uses to tell you about it isn’t really visible when you’re wearing the damn things.

I like the Plantronics system here. There’s no better time to tell me how much battery life I have left than when I’m about to leave the house.

But now we come to the end of our battery’s life, and suddenly I’m very angry indeed. It seems (based on my very rigorous survey of two headsets) that the accepted solution to this problem is to make obnoxious noises so regularly and disruptively that for all the quality of listening you get, the fucking thing might as well have turned itself off immediately.

Specifically, the BackBeat reminds you every 30 seconds or so to “Recharge battery”, or sometimes just says “battery low”, to mix things up a bit. This whole process lasts for about 20 minutes, by the end of which you will be ready to scream “I know, for fuck’s sake, SO SHUT UP” to the consternation of everyone on your tram.

The Tone has a similar but original take on how best to annoy the hell out of you. It only starts nagging you with about 5 minutes left on the clock,[1] and it does so with loud beeping tones that will drive you mad, unless they happen to align hilariously with your podcast and create the illusion that your hosts are swearing profusely.

And even then… these beeps are loud. Louder than the current volume level. They’d almost be tolerable if they were a nice subtle background hum.

What are they trying to do here? All they need to convey is that you’re about to run out of battery. Are they targeting people with ridiculously short attention spans? Are they targeting people who like to listen to music but keep on putting their headphones down for five minutes at a time? Normally when I ask frustrated hypotheticals like this, I am forced to admit that I know the answer and can even sympathise with it.

Not this time. I seriously have no idea what they’re thinking. If anyone knows, please tell me. It might make me feel better.