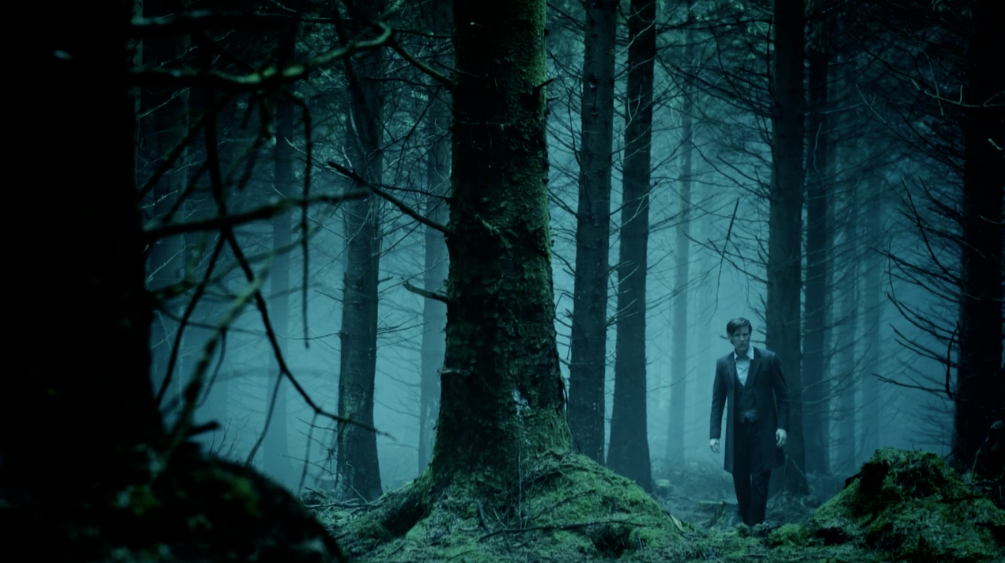 How wonderful to get an episode of Doctor Who that isn’t immediately forgettable.

‘Hide’ kicks several key goals that make you feel like it actually has a reason to exist. It has characters in it: not just vague ciphers, but actual interesting people who you get to spend a bit of time with and feel connected to. It has genuinely moving and thoughtful moments between the Doctor and his companion. And it has a decent plot that in general, makes sense and concludes sensibly.

There’s flaws, for sure, but with those runs on the board, who cares? Well, me… at least, enough to write them down. Mac Rogers and Philip Sandifer have pointed out the rather pissweak juxtaposition of the Doctor’s discussion of life, death and regret with Alec with Clara and Emma talking about boys.[^1] And later, after Alec tells her not to risk her life to save the ghost, we annoyingly miss the bit where she says she’s going to do it anyway, which robs her of what would have presumably been a pretty good character moment.

But let’s talk good stuff. I was quite unnerved early in the episode: the perennial freakiness of a mysterious figure screaming in a photo is put to excellent effect throughout the first half of the story. Sadly, the episode loses a lot of its spookiness when the mystery is resolved. This is almost made up for by the beauty of the scenes in the pocket universe, and the fascinating design of the eventual monster. Unfortunately, the explanation of the monster isn’t quite up to the same level as the creature’s grotesquely impressive form: it’s not that it explicitly doesn’t make sense, but I’d have liked it to 'click’ a little more than it does.

Dougray Scott and Jessica Raine play the two most successful supporting characters I can remember in ages, and really sell their 'assistant’[^2] relationship well. It borders on stereotype in places, but there’s enough genuine-feeling dialogue and heartfelt glances to sell me. Meanwhile, I feel like we get some of the best Clara moments since she became a proper companion. Her indignation at the TARDIS is presumably foreshadowing for an upcoming revelation, but it’s funny enough that it doesn’t irritate on Nick-Fury-In-Iron-Man-2 levels. Her fear/bravery in the face of ghosts was well-handled too. I’m a fan.

But most awesome of all, and a rare moment where Who twists from time-travel hijinks to genuine, unexpected feeling, is the scene where Clara realises that she’s just seen the Earth created and destroyed in a few minutes. I can imagine this scene falling flat, with the audience not really understanding what she’s getting at. But between the acting, the writing, and the direction, it really reminded me how amazing this show can be when it actually takes the time to think about things for a bit.

I think 'Hide’ may be my favourite episode since 'The Girl Who Waited’. It’s been a long time between drinks; I hope this kind of drought doesn’t happen again.