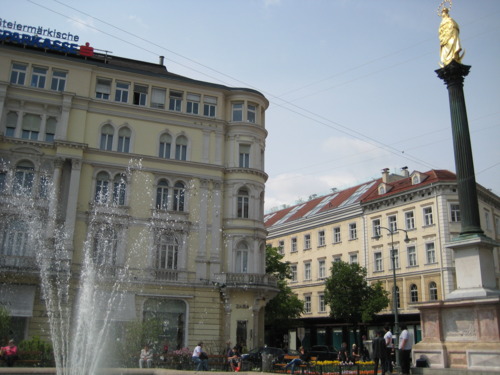 Possibly because it was my first European city, I fell in love with Graz quite easily. I’d never seen such old things within a city before, or a river integrated quite so nicely, or a giant clocktower on a mountain overlooking the town. Or, for that matter, a giant greenish heart-shaped building. No, not heart as in ♥. Heart as in a giant human heart ripped out and dumped next to the pavement. For some reason, I didn’t take a picture, so I’ve had to steal a picture from the internet to show you it’s tremendous ugliness.

I told my tour guide/old friend Hayko that I was looking forward to seeing old stuff, and he was glad that I’d come to Graz before Roma. This was possibly true, as later in the trip I would become somewhat blasé as I wandered the streets of Roma, past all sorts of buildings that earlier in the trip I’d have stopped, photographed and looked up on wikipedia. But Graz had fantastic style, regardless of how old other cities might get. Did you know, [Graz ist UNESCO’s City of Design](https://www.flickr.com/photos/tomcharman/albums/72157626653878878)?

So: things to see in Graz… 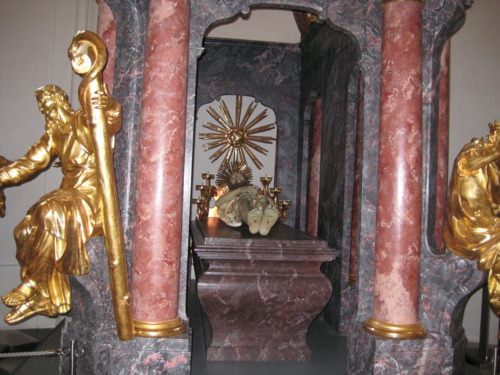 Ferdinand II, Holy Roman Emperor, King of Bohemia and Hungary is buried in Graz. As you’d expect, it’s a restrained sort of setting. Just him and an ornate Jesus lying above him. I’m not sure if this was the afterlife equivalent of having a nightlight, or whether he merely wanted the big J there to establish the class of person you might find buried there.

More commonly and succinctly known as Schloßberg, the things on the mountain next to Graz were once an impressive castle, until Napoleon visited and made some tasteful explosive adjustments to the structure. Hayko told me that the townspeople negotiated to keep their clock tower, presumably because they knew one day they’d have to hang their UNESCO City of Design poster next to it.

There’s some awesome stairs leading up the side of the mountain, made by Russian prisoners of war, and a well at the top that was made by Turkish slaves. It turns out Österreicher don’t actually build anything themselves, they just wait for other people to turn up and make them do it. Hayko tried to force me to make him a new patio, but I ran away to Hrvatska before he could.

You’re not allowed to take photos in this armoury, but I attained a shot of a suit of armour through cleverly-applied ignorance (I’d have found it difficult to take a picture had I known there were rules against it). Graz used to service the surrounding area with armour, weaponry and even more weaponry, and surviving in a relatively unassuming building are thousands of suits of plate mail, pistols, halberds, swords, helmets, you name it. None for sale, however. I did get to wear a helmet and hold a sword at one point. Disappointingly I didn’t look even remotely as cool as I felt.

In amongst the various implements of warfare and pain, they also had the records of audits that had been done after battles. I had to take a picture of these, as they were awesome. That picture came out badly and is not present–luckily the picture I took of the translations is perfectly legible. I can just imagine the auditors I worked with at AMES doing this job hundreds of years ago, and being generally resented by everyone. 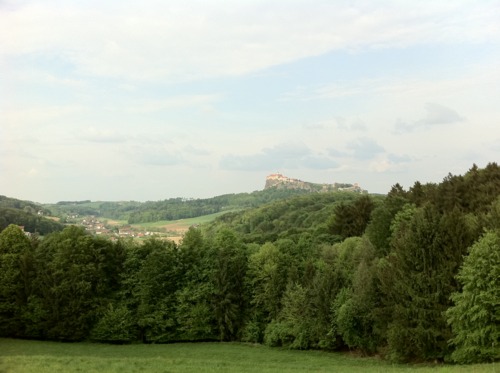 This was my first proper castle, and I shall always remember it. Oddly, walking up the path made me feel the same way I’d felt outside the Marina Bay Sands in Singapore: I can’t seriously be next to this thing. I guess something inside me had never quite believed that castles really existed.

Apparently, many women who visited in the past may not have had such romantic experiences–the exhibition within the castle tells happy tales of a bygone age when people you didn’t like were probably witches. They had an iron maiden on display, and I don’t think anything has freaked me out so deeply since my Nan’s Gerry Gee doll.[^1]

In a way, nothing I saw in Europe topped this. There’s something pretty freaking cool about a castle on top of a massive hill.

The big revelation in Österreich was kernöl, or pumpkinseed oil. It can be used to make a pretty amazing salad dressing, or in burgers, or in soup, or probably in any food you care to name. I brought some home, but you can’t have any. It’s mine! ALL MINE! MINE!

Also, I had some blunzngröstl, which was delicious, until Hayko told me what it was. Actually, I was quite relieved when he told me what it was, as he’d been taunting me with it for days, and I was starting to fear it was some hideous mixture of testicles, liver and brains.

Did you know, Graz ist City of Design?