A happy day indeed as Carcassonne comes to the iPhone. No, it's not a guide to the heritage listed and fortified French town. Sorry to disappoint you. It's a port of perhaps the most elegant board game ever devised. 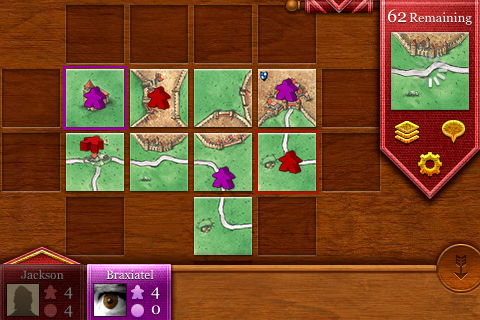 Basically it's about making a city with roads and the occasional monastery and also farmers if you don't forget about that whole part of the game and then suddenly it's scoring time and your friends all put down farmers and you didn't notice and they've got a whole boodle of points you weren't expecting. Ahem. I won't go into the details. There's a tutorial. I will instead praise the port for being very, very good. The implementation is neat. The multiplayer is fantastic: you can play hot-seat, you can play online, you can play against your iPhone. And they've even added a solitaire version in there in case you just want to play with yourself. Most notably, it hasn't crashed once despite being only out for a few days. Now that's care and attention.

I only have a few tiny niggles, and they're really only just that, in descending order of importance:

Anyhow, recommended if you like this sort of thing. Also, in case anyone out there has or is going to have an iPad, you should know that they're going to build iPad support into this app, so buying now (at a reduced price) gives you Carcassonne for iPad AND iPhone/iPod Touch.